Horns and sirens, also known as “sounders”, are tone generators that output an audible signal when a voltage is applied to their input power terminals. Sounders are self-generating – meaning that the tones are pre-programmed into their circuitry and the sound is simply emitted when power is supplied.

Up to 80 pre-programmed tones and 4 different events

Pfannenberg offer sounders which are suitable for use both indoors and outdoors and are adapted to all industrial requirements.

The perception of acoustic signaling devices is determined by many factors. In particular, ambient noise and the use of hearing protection must be taken into account. This can be done with Pfannenberg’s 3D-Coverage  method which takes advantage of effective performance in a given space rather than relying solely on nominal output data presented in typical specifications.

The goal of 3D-Coverage is to provide a visual representation of the effective range of the signaling device, lending justification to its successful implementation in the defined space. Using Pfannenberg’s 3D-Coverage method,  planners are now able to determine the actual effective coverage area for audible and visual signaling devices.

Whether or not the audible signal from a sounder is successfully perceived is not just dependent on the output sound level generated and technology used to create the alarm signal. Ambient noise levels and sounder placement location are crucial elements that should not be overlooked.

The adjacent example illustrates the effect on coverage volume of an 100 dB(A) audible signaling device due to a 10 dB(A) change in ambient noise level. Increasing from 75 dB(A) to 85 dB(A) shows that the warning signal will not be successfully perceived. 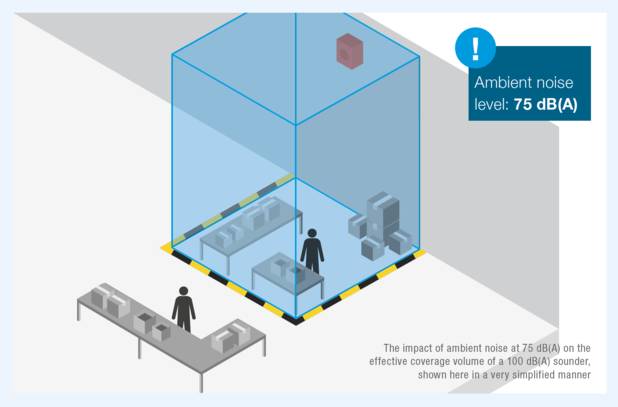 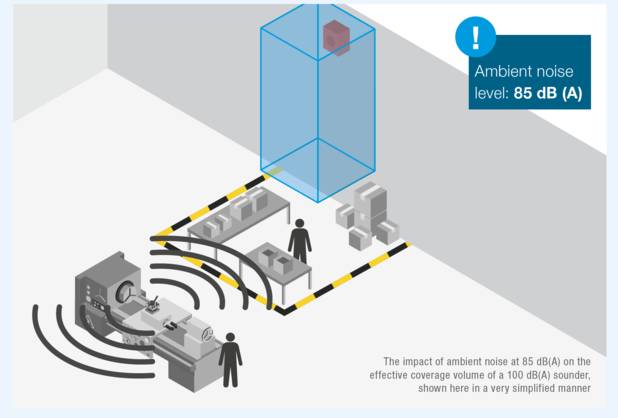 The 3D-Coverage values show that the effective covered area is significantly reduced when the ambient noise level rises.

If the alarm system designer does not take all aspects into consideration, the consequences can spell danger for people in the surrounding area.

The figures shown are mainly for a quick orientation. For an individual and precise interpretation please use PFANNENBERG SIZING SOFTWARE (PSS)