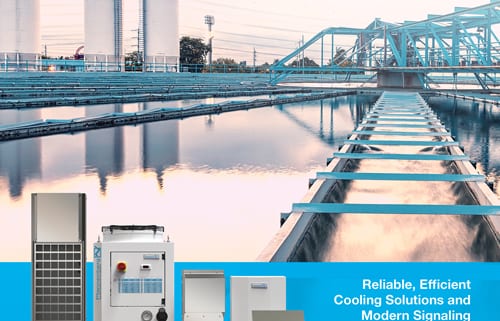 We are excited to announce the release of our latest brochure that highlights Pfannenberg’s Broad Range of Products for the Unique, Demanding Requirements of the Water and Wastewater Industry.

Dedicated Solutions for YOUR Application 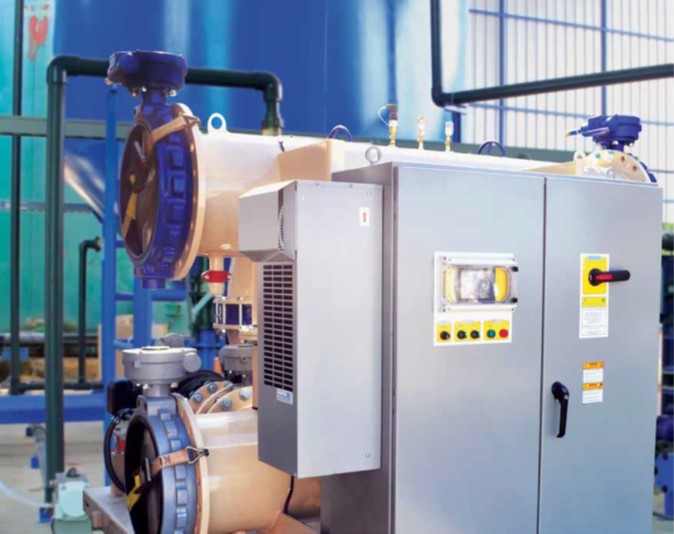 Solutions include cooling systems that can withstand extreme conditions like corrosion due to Hydrogen Sulfide gas and signaling systems that notify employees of life-threatening situations like toxic gas leaks, as well as other solution essential to protecting the safety of employees and the efficient operation and long service life of equipment.

Pfannenberg’s thermal management solutions for enclosure electronics range from the highly energy efficient Original Filterfan® to the PWS Air/Water Heat Exchangers that can remove a considerable amount of heat while isolating sensitive electronics from a corrosive atmosphere outside of the enclosure. 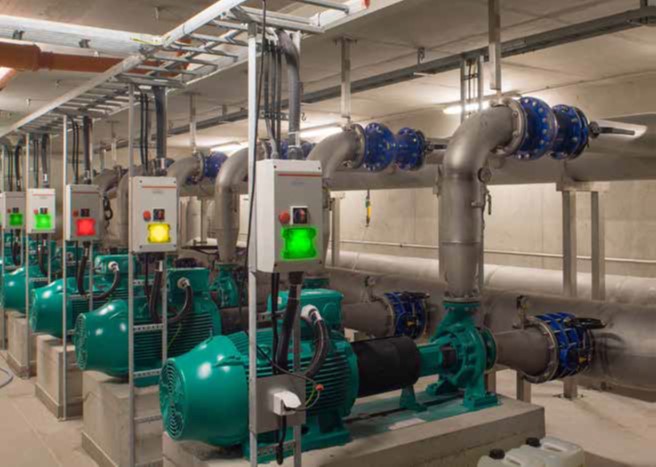 Pfannenberg has developed a broad range of audible and visual signaling technologies to provide:

> An Indication of the status of a machine, process or test procedure

> A Warning of a dangerous situation or required corrective action

> An Alarm to alert personnel of life threatening and emergency situations. 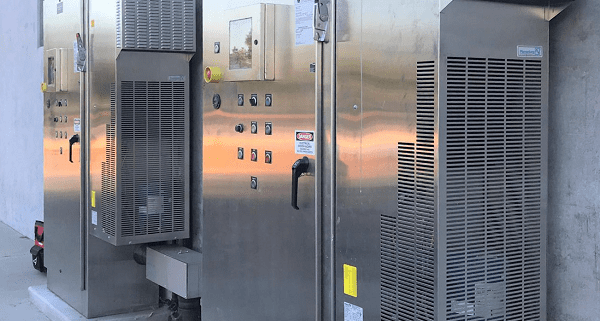 Pfannenberg’s  DTS 3681 (NEMA Type 4/4x)  Side Mounting Cooling Units were selected for the job. The stainless-steel cooling units have a large capacity, at almost two tons. They are specially designed for long term use in high temperature, high ambient environments, such as the odor control system. 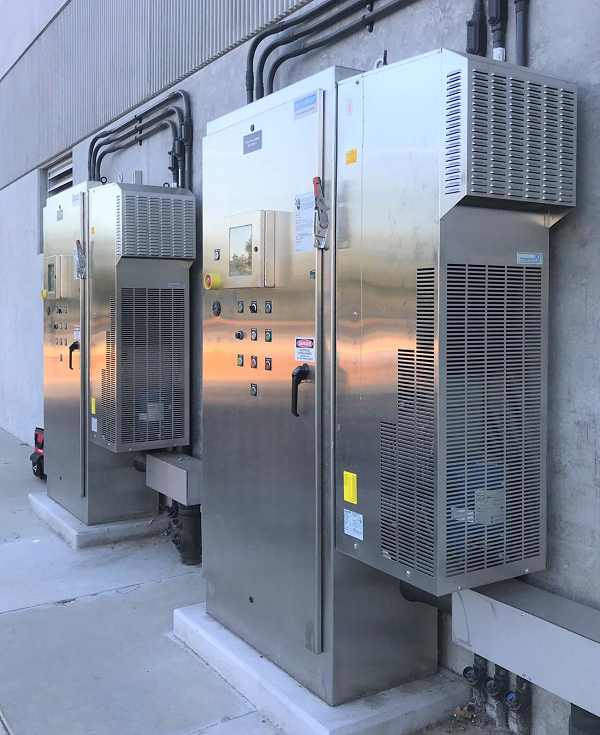 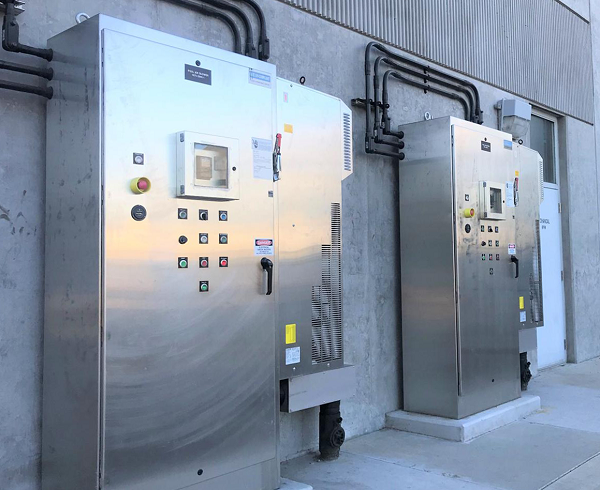 The DTS 3681 cooling units are self-protecting from harsh environments due to a number   of features, including the location of the control electronics within a dry, cool interior circuit. All the constituent components comply with the highest standards which makes these cooling units, the best option for protecting critical electronics.

Pfannenberg’s DTS 3681 Cooling Units are sure to last long in serving the odor control system. Reasons for this include the high airflow backward curve impeller fan, which provides high airflow in a long lasting, single bearing design. This is in contrast to the typical two-bearing blowers, with the DTS 3681 Cooling units boasting nearly twice the lifespan!

In 2015 Pfannenberg provided signaling notification appliances (alarm horns and strobes) to the North Tonawanda Wastewater Treatment Facility as part of their new Gas Detection Alarm System. On the evening of Tuesday, September 13, 2016 there was a very small chlorine gas leak. Pfannenberg’s PATROL Signaling Alarms were triggered through the system notifying plant personnel and surrounding area. The alarms could heard up to a mile away from the facility. 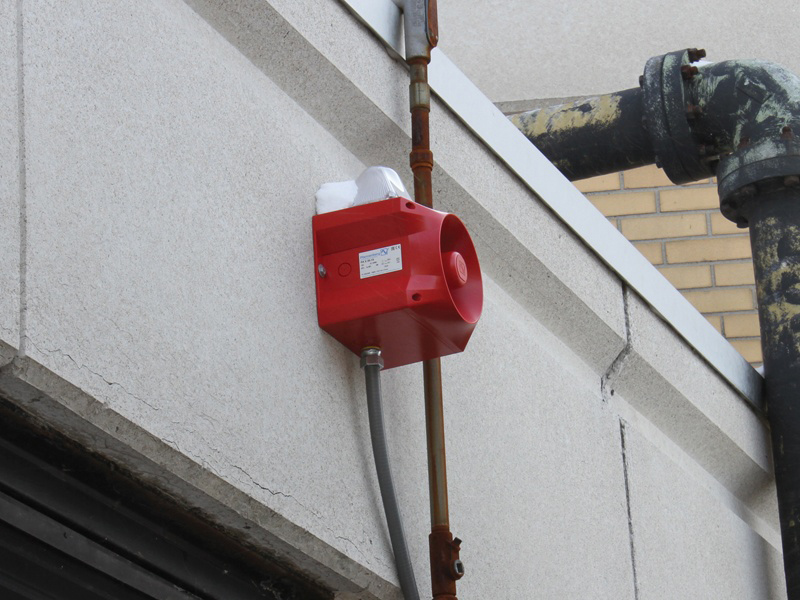 Even though the leak was very minor, everyone was pleased to know that the system worked as specified, providing adequate warning. Hopefully there will never be a larger leak, but if there were then it is reassuring to know that the personnel and community will have plenty of advanced warning to the potential hazard.

Click Here to check out our case study about this project. 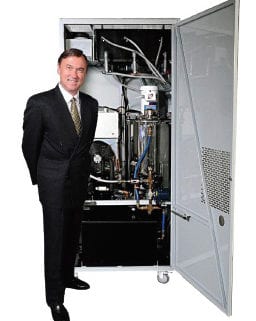 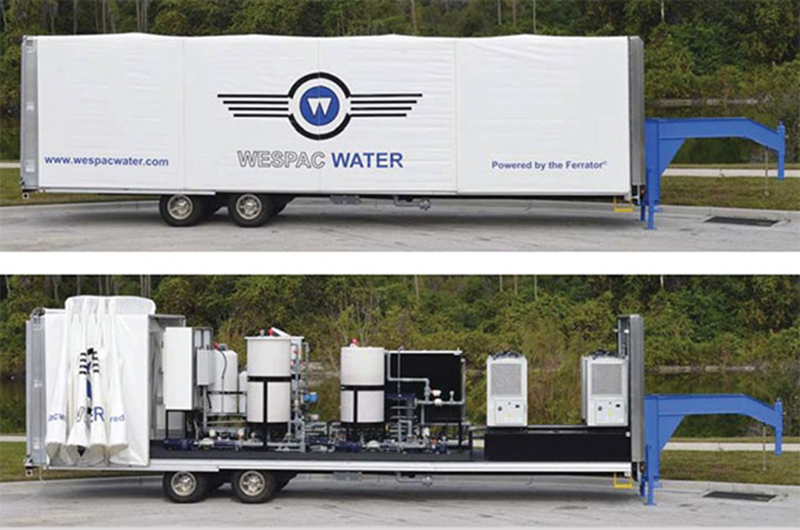 Pfannenberg fits chiller into confined space within a packaged Ferrator® targeted for water and wastewater treatment in third world countries.

In their quest to develop an affordable Ferrate synthesis system, Ferrate Treatment Technologies, LLC of Orlando turned to Pfannenberg for help with developing a liquid cooling solution for a small, cabinet based system. While already using Pfannenberg chillers for larger, trailer-based Ferrate synthesis systems, standard packaged chillers were capable of integrating seamlessly within the concept of the self-contained cabinet-based Ferrator system.

The “Packaged Ferrator®”  overcomes the obstacles and high cost of using Ferrate, a highly potent oxidizing disinfectant for water and wastewater treatment. The portable Ferrate sythesis system is a game changer for delivering effective treatment for remote locations in underdeveloped nations.

The Treatment or “Cleansing” of Water Takes on Two Primary Requirements:

For both requirements, an element of cleansing involves disinfection which can be accomplished by several methods intended to kill, remove, or oxidize the contamination. Techniques include mechanical separation such as filtering and reverse osmosis; exposure to ultraviolet light and radiation; and the addition of chemicals such as chlorine or ozone, and now Ferrate. Each technique has its own advantages, disadvantages, effective cost ratio, and ability to scale up in order to treat the affected volume of water.

Oxidation is a process which causes chemical decomposition as well as breakdown of both organic and non-organic substances and is vital for the removal of contamination from water. As a chemical additive, Ferrate possesses extraordinary oxidation capabilities, however, it has historically been quite expensive to manufacture, which has limited its use primarily to laboratory research applications. 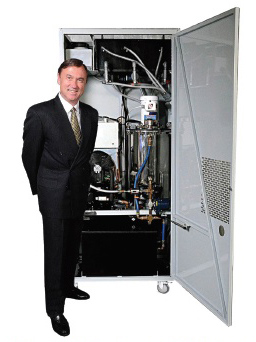 Attempts to produce economical and commercially viable quantities of Ferrate had seen limited success until Ferrate Treatment Technologies, LLC of Orlando (FTT) changed the game by creating a streamlined synthesis process and point-of-use production device. By eliminating storage, handling, and transportation costs associated with a pre-packaged product, FTT has cut Ferrate deployment costs by more than 85%.

The breakthrough device is called a Ferrator, initially available as a trailer or skid mounted system with various capacities targeted for water treatment applications in rural areas. The Ferrator is suitable for a variety of applications including municipal wastewater, industrial wastewater, drinking water, ship ballast water, and environmental water restoration.

The Ferrator synthesizes Ferrate on-site from three raw ingredients: iron, bleach, and caustic, which are pumped to a homogenizer and reaction chamber. The final product is a liquid which is stored in a tank. Both the reaction and storage areas require cooling, which is provided by Pfannenberg chillers.

When FTT encountered problems with units from another manufacturer they contacted Pfannenberg to provide EB 150 chillers for skid-based systems.

Due to their successful experience with Pfannenberg chillers for system based electrical enclosure cooling, FTT turned to Pfannenberg once again for assistance with a project that required a chiller to fit in a smaller scale Ferrator system into an enclosure. Initially, a CC 6301 packaged chiller was used successfully; however, new design criteria required further miniaturization and this standard packaged chiller would no longer fit. The Pfannenberg engineering team went to work on designing, building, and delivering and open frame unit based on the CC 6301 that could fit within the confines of the small Ferrator enclosure.

” Without Pfannenberg’s cooperation, full support and timely expertise, FTT could never have achieved this historic build for a major philanthropic foundation that is committed to improving the lives of impoverished people in developing countries.” -Luke Daly, CEO (Ferrate Treatment Technologies, LLC)

The small scale Ferrator is targeted for use in third world areas for the treatment of human wastewater and drinking water. Here, the efficiency of the self-contained system will permit water purification in remote areas in which there are no sewer systems, water distribution systems, or central water treatment facilities. The small size of the Ferrator permits it to be readily transported to such remote areas and even be used as a portable device for use at multiple locations. The goal is not only to reduce the adverse effects of discharging untreated wastewater to the environment, but also improve human health by reducing contamination in water available for drinking. 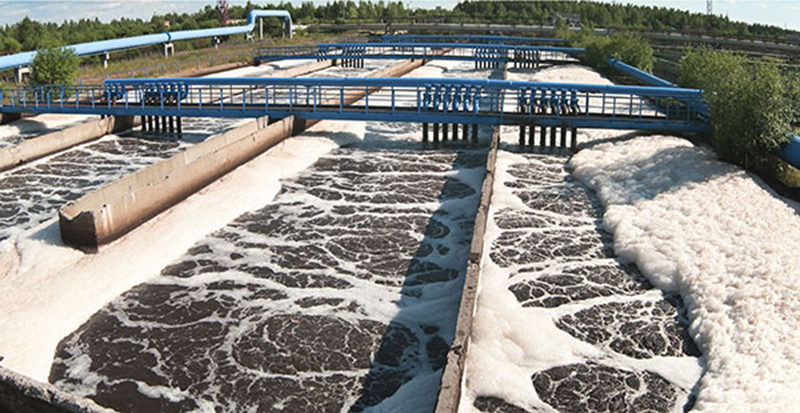 Enclosure Cooling Units offer a straightforward active-cooling technique for pump control panels, however, they are not necessarily the best choice for all installation locations. Dirt, dust, and other airborne contaminants can clog condenser coils; while corrosive gasses in the environment can lead to premature failures.On the other hand, Air To Water Heat Exchangers can satisfy the same requirements without circulating ambient air within the housing, thereby eliminating the clogging and corrosion problems associated with airborne contamination.

A common threat to organic wastewater handling and treatment systems is the presence of hydrogen sulfide gas. Not only is this gas toxic to humans, but it also contributes heavily to corrosion problems in pipes, structures, instrumentation, and electrical systems. Lift stations and pumping systems are particularly vulnerable as H2S sour gas readily attacks copper used in wires, electrical contacts, and cooling units used on motor control centers (MCC’s).

Electronics cooling is vital for MCC’s containing the variable frequency drives (VFD’s) that are used to maintain efficient operation by conserving energy through regulating the speed at which pumps operate. Since VFD’s generate a considerable amount of heat, it is necessary to employ an active enclosure cooling technique in order to keep VFD’s operating within acceptable temperature limits. The absence of effective cooling will quickly allow VFD’s to overheat, shut down, or even catastrophically fail. In addition to being an economic loss, such outages disrupt production and affect the efficiency of plant operations. 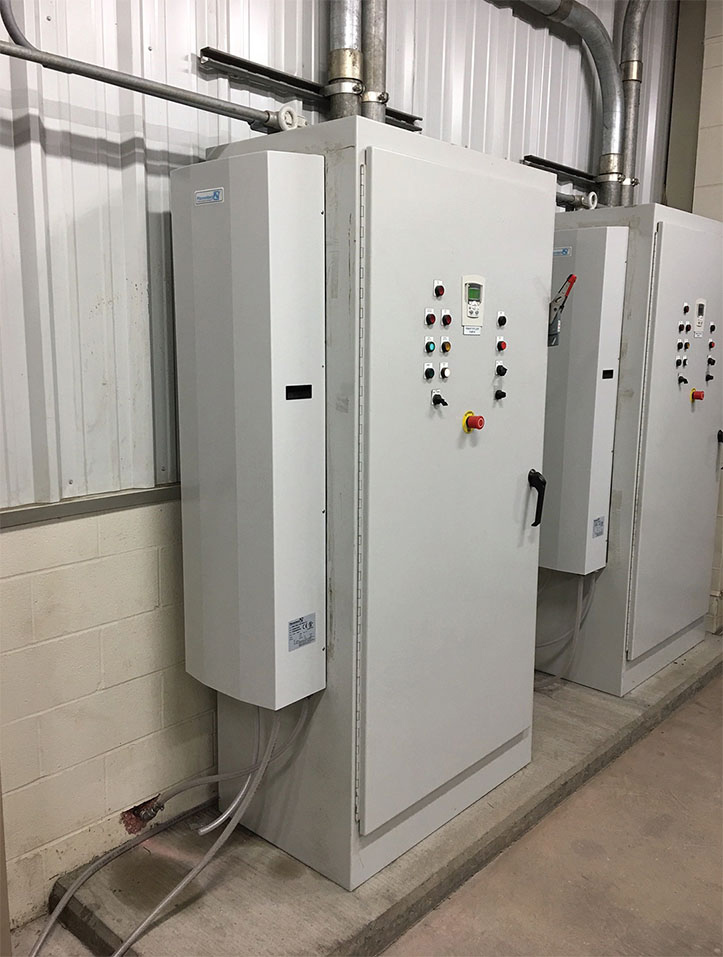 Effective electrical enclosure cooling for environments where H2S gas is present must utilize a closed loop technique to ensure that sour gas is not introduced into the enclosure where it could harm wiring, electrical connections, switches, and other components. In fact, for many installations it is advantageous to deploy an air or nitrogen purge system which creates a positive pressure within the enclosure in order to keep undesirable ambient elements, including sour gas, outside of it. As opposed to an open loop system that uses fans to draw ambient air into and push heat out of the enclosure, a closed loop system maintains isolation of the ambient air and permits the NEMA rating of the electrical enclosure to be maintained. Examples of closed loop cooling equipment for electrical enclosures include cooling units (also known as enclosure air conditioners or enclosure AC) and Air To Water Heat Exchangers.

Cooling units offer the advantage of a being a plug and play solution – they simply hang onto the outside of the enclosure and are connected to power already available inside the enclosure. However, these compressor-based refrigeration systems consume a fair amount of energy and require periodic maintenance. Additionally, to endure the sour gas environment, exposed copper pipes and condenser coils must be treated with a conformal coating – which is not necessarily standard. Over time, the need to clean condenser coils – which may require partial disassembly of the cabinet – can lead to scratched paint, compromised coatings, and eventual corrosion.

Air-to-water Heat Exchangers offer several advantages making them the preferred method for closed-loop, electrical enclosure cooling. Acquisition and operating expenses are significantly lower than those of a compressor-based cooling unit.

Additionally, this product is virtually maintenance free and since there is no ambient air circulation within the unit, there is no risk of H2S sour gas corrosion to internal components.

There are, however, two challenges with acquiring and implementing these units:

Another viable implementation is to consider retrofitting cooling units with air-to-water heat exchangers. This modification can be readily accomplished without difficulty since some units share the same enclosure cut-out. For dissimilar cutouts, an adaptor plate may be required to reduce the size of the opening.

Need more information on Pfannenberg’s PWS Air to Water Heat Exchangers? Click here and discover all the advantages of this product!